UNDER THE COVERS – ALADDIN SANE 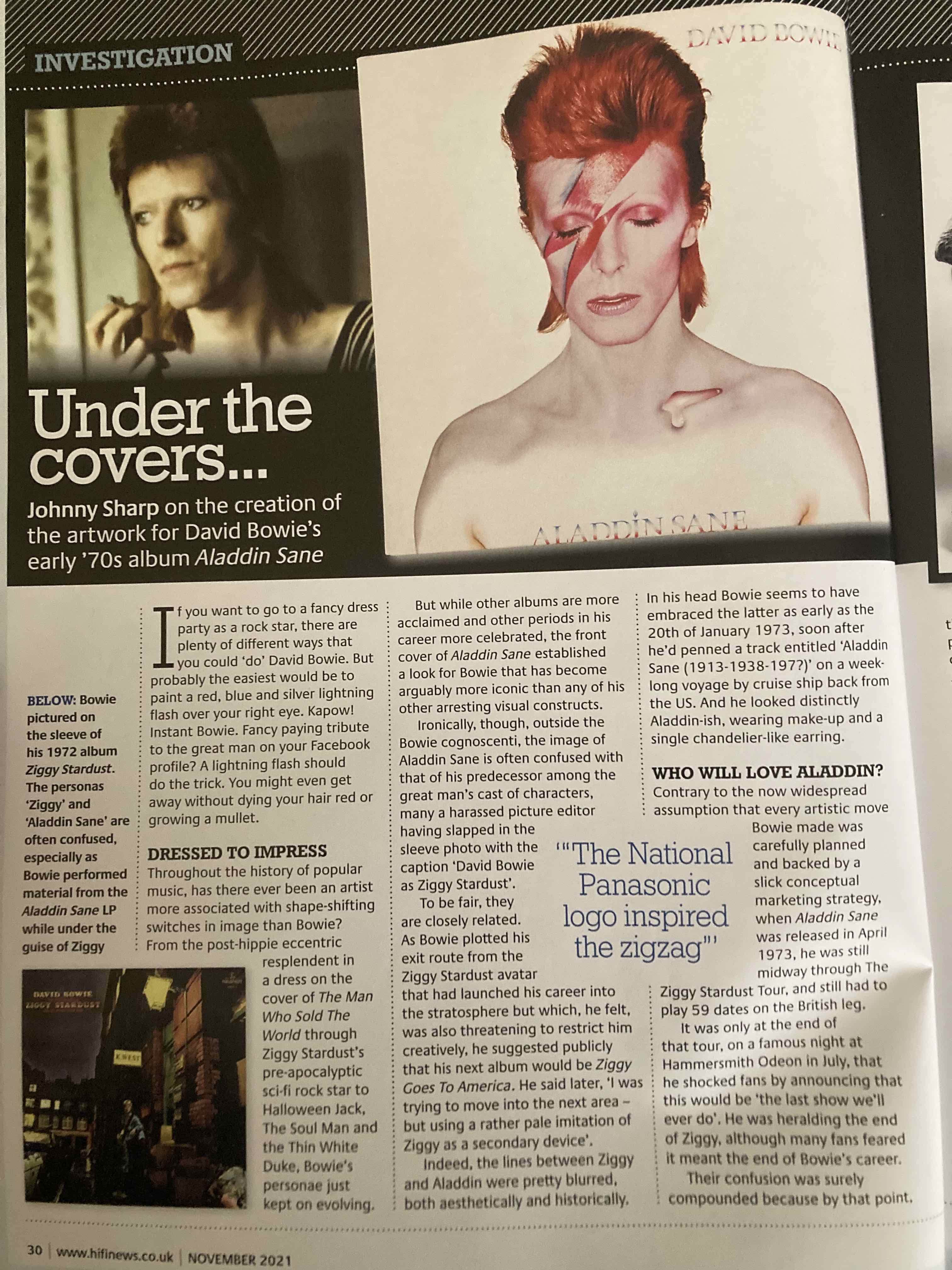 If you want to go to a fancy dress party as a rock star, there are plenty of different ways that you could do David Bowie. But probably the easiest way would be to simply paint a red, blue and silver lightning flash over your right eye. Kapow! Instant Bowie. Fancy paying tribute to the great man on your Facebook profile? A lightning flash should do it. You might even get away without dying your hair red or growing a mullet.

Throughout the history of popular music, has there ever been an artist more closely associated with shape-shifting switches in image than Bowie? From the post-hippie eccentric resplendent in a dress on a chaise longue on the cover of The Man Who Sold The World through Ziggy Stardust’s pre-apocalyptic sci-fi rock star to Halloween Jack, The Soul Man and the Thin White Duke, Bowie’s personae kept evolving. But while other albums are more acclaimed and other periods in his career more celebrated, the front cover of Aladdin Sane established a look for Bowie that has become arguably more iconic than any of his other arresting visual constructs.

Ironically, though, outside the Bowie cognoscenti, the image of Aladdin Sane is often confused with that of his predecessor among the great man’s cast of characters, with many a harassed picture editor having slapped in the sleeve photo with the caption ‘David Bowie as Ziggy Stardust’.

To be fair, they are closely related. As Bowie plotted his exit route from the Ziggy avatar that had launched his career into the stratosphere but which, he felt, was also threatening to creatively restrict him, he suggested publicly that his next album would be “Ziggy goes to America”. He later told Rolling Stone, “I was trying to move into the next area – but using a rather pale imitation of Ziggy as a secondary device.”

Indeed, the lines between Ziggy and Aladdin were pretty blurred, both aesthetically and historically. In his head Bowie seems to have embraced the latter as early as 20 January 1973, soon after he’d penned a track entitled ‘Aladdin Sane (1913-1938-197?)’ on a week-long voyage by cruise ship back from the US. He looked distinctly Aladdin-ish, wearing make-up and a single chandelier-like earring, telling ITV’s Russell Harty, “I’ve always seemed to collect personalities, ideas”.

WHO WILL LOVE ALADDIN SANE?

Contrary to the widespread assumption that every artistic move Bowie made was carefully planned and backed by a slick conceptual marketing strategy, when Aladdin Sane was released in April 1973, he was still midway through The Ziggy Stardust tour, and indeed still had to play the 59 dates on the British leg. It was only at the end of that tour, on a famous night at Hammersmith Odeon in July, that he shocked fans by announcing that this would be “the last show we’ll ever do”, thereby heralding the end of Ziggy – although many fans feared it meant the end of Bowie’s career.

Their confusion was surely compounded because by that point, the Aladdin Sane LP had long since peaked at the top of the album charts, and its first two singles, ‘The Jean Genie’ and ‘Drive-In Saturday’, had made the UK top three.

It soon became clear that although Ziggy’s screwed up eyes and screwed down hairdo were now history, Bowie was anything but finished, and indeed the look achieved on the Aladdin Sane sleeve would endure more powerfully than any other.

His face is split in two, as if to denote a half-man, half-supernatural being, by a red and blue lightning streak. He is looking down, as if despondent or waking from some sort of hibernation, while a shiny, metallic airbrushed tear has dripped onto Bowie’s unclothed collar bone below.

“An electric kind of thing,” Bowie later explained to Rolling Stone. “Instead of, like, the flame of a lamp, I thought he would probably be cracked by lightning. Sort of an obvious-type thing, as he was sort of an electric boy. But the teardrop was Brian Duffy’s, an English artist-photographer. He put that on afterward, just popped it in there. I thought it was rather sweet.” In fact it was airbrushing specialist Philip Castle who added the teardrop, also lending a silvery effect to the subject’s already milky-white skin.

But that’s not to detract credit from Duffy, the former fashion photographer who played a key role in firming up the visual elements. Duffy, who died in 2010, has said he believes that Bowie took inspiration for the flash from the ring Elvis used to wear with the ‘TCB’ acronym (standing for ‘Taking Care of Business’). However, the zigzag was further inspired by a humble domestic appliance Duffy and makeup artist Pierre LaRoche had seen lying around in the photography studio. “It was the trademark for National Panasonic – a red and blue zigzag that I took from a rice cooker,” Duffy told Grant Scott in Professional Photographer magazine in 2007. “I drew the zig-zag onto his face…”

Duffy’s studio manager Francis Newman, explained more to AnOtherMagazine: “Pierre started to apply this tiny little flash on his face and when Duffy saw it he said, ‘No, not fucking like that, like this.’ He literally drew it right across his face and said to Pierre, ‘Now, fill that in.’ It then took Pierre about an hour to apply properly. The red flash is so shiny because it was actually lipstick.”
Other factors at work in this look and many others of Bowie’s around this time came from his fascination with Japanese Kabuki theatre, which was a big inspiration for the fashion designer Kansai Yamamoto, who worked with Bowie on many of his Ziggy costumes such as asymmetrical leotards, a silver example of which Bowie models on the gatefold of Aladdin Sane

The photo that ended up being chosen was one from a contact sheet, some of whose shots see Bowie looking directly at the camera and some in profile. The one used turned out to be the only one where he was looking down.

THE COLOURS OF MONEY

For all that, the vibrant shades that shone out from record sleeves actually had a lot to do with the power games of Tony DeFries, Bowie’s manager. DeFries was keen to make the record company take his client seriously, and to that end, he insisted the cover image be produced with an unprecedented seven-colour printing system, as opposed to the usual four, to optimise its visual impact on record shelves.

“I was looking for an iconic cover image and artwork that would help me to persuade RCA that Bowie was sufficiently important to warrant megastar treatment and funding,” Tony Defries explains in the book Duffy/Bowie.

“Tony realised that, in order to get the record companies really going, you had to get them up to their neck in debt, which was of course a masterstroke,” Duffy told the BBC Documentary Duffy: The Man Who Shot The Sixties in 2009. “If it cost 50 quid… well, so what one way or the other. If it cost £5,000, the record company were now having to pay attention.”

The photograph would be a dye transfer, while to get the colour transparency onto paper at further outrageous expense, plates were ordered from Switzerland, and typesetting for the coloured name and title, [in Cristal font, typography nerds] was provided by Conways [‘the most expensive’ again, said Duffy].”

The result was reputed to have been, at the time, the most costly cover in pop history. But if you’re going to push the boat out, you might as well get a lasting bang for your buck, and the way that sleeve has resonated down the ages is something that could hardly have been foreseen at the time. “To me, it was competent, very competent, but I wouldn’t take it much beyond that,” the ever-unexcitable Duffy told the BBC. However, his designer colleague Celia Philo remembers taking a different view. “When I first saw the contact sheets, I knew it was going to be a very, very powerful album cover. Time wise, it was pre-punk, it was pre- people walking down King’s Road with coloured hair and make-up on their face.”

Oddly enough, the album shoot was the only time Bowie wore the flash design across his face, although it featured on concert backdrops. Unlike the astral sphere he had worn as Ziggy, it didn’t end up as a part of his regular stage or photoshoot make-up – again, a reflection of not everything Bowie did being quite as clear-cut and controlled as his reputation would suggest.

Yet Duffy’s son Chris reckons it’s iconic enough to be compared to the ultimate artwork.

“Several years ago I started calling it the Mona Lisa of pop,” he told AnotherMagazine. “…there isn’t really an image that is as ubiquitous. It’s been on used fridge magnets, caps, calendars, t-shirts, lighters, beer mats and it is quite extraordinary, you know?”

And will we still be gazing at it on gallery walls for centuries to come? Quite possibly.