50 years ago, Britain’s worst winter of the 20th century brought the country – and football – to a standstill. And it played its part in a pivotal season of stark contrasts for United.

As autumn turned to winter in the UK in 1962, a new dawn was breaking.

The Beatles had just registered their first UK hit, the first James Born movie, Dr.No, was about to make a star out of one-time United triallist Sean Connery, and the Cuban Missile crisis had seen nuclear conflict narrowly averted.

The period would also prove a turning point for Matt Busby’s men – and how they needed one. Having limped home in 15th place the previous term, even the record summer signing of Denis Law couldn’t lift dismal early season form that saw Matt Busby’s men lose nine of their first 14 games in League Division One.

A humiliating 6-2 thumping at Tottenham left the reds propping up the table after the penultimate weekend of October. Crowds of over 60,000 at the start of the season had thinned out, with only 27,946 turning up to see the visit of Nottingham Forest in December. Had the defiant spirit that kept United afloat immediately after Munich now wilted?

Thankfully, a run of five wins, three draws and one defeat in the period up to and including Boxing Day headed off any immediate concerns. And as a white christmas enveloped Manchester, few were grumbling. The home fixture against Arsenal on Saturday December 22 was abandoned due to freezing fog, but the Gunners had taken a 1-0 lead, so it was perhaps just as well. A 1-0 victory over struggling Fulham on Boxing Day left United comfortably tucked up in mid-table. Who would have guessed that it would be their last game for eight weeks?

More heavy snow began to fall that very same evening, and the christmas tradition of teams playing each other home and away during the festive period went unobserved, as the Old Trafford fixture against the Cottagers on December 29 was one of 35 football league matches to be rendered unplayable – a new record for the league. The sub-zero temperatures and snow showers didn’t relent, and January 5, the first saturday of 1963, saw 29 FA Cup third round matches cancelled, including United’s fixture against Huddersfield Town. A week later, the league postponement record was beaten again, with 42 out of 46 football league matches off, including United’s scheduled visit to Birmingham City.

Football was becoming the least of Manchester’s worries, though, as coal stocks ran low and burst mains led to eight people dying from gas inhalation, including a family of five in Salford. Further blizzards across the UK deepened the freeze, with 54 games unable to go ahead on January 19, United’s home game against Leyton Orient among them. League leaders Spurs were an exception, managing to record a 2-0 victory over Blackpool in swirling snow, after even the manager had mucked in with a spade to clear the snow.

All bets were off as to when things would return to normal. Quite literally in the case of the football pools, which were an institution at the time. With the flutter-hungry British public unable to get their fix, and charitable organisations that benefited also taking a financial hit, The Pools Panel was formed and sat for the first time on January 26, headed by Lord Brabazon, along with a group of ex-pros and officials who would come up with a set of “fairy-tale soccer results” to sate the punters. The panel still sits today.

By that time, the scheduled slot for the fourth round of the FA Cup had been and gone, and when Saturday February 2 saw a familiar story put paid to 40 out of 44 football league matches, including the Manchester derby at Maine Road, the whole season was in chaos. Several clubs managed to defrost their pitches only for them to freeze again straight away, leaving them in an even worse state than before. Norwich City used military flame-throwers on the Carrow Pitch and flooded it, while Halifax Town saw a similar outcome through to its natural conclusion, turning the pitch at The Shay into a public ice rink and charging to use it.

No such wacky schemes from the ever-unflappable Matt Busby, who had used the extended break to complete a £50,000 deal to sign Pat Crerand from Celtic, making United what one newspaper incredulously labelled “a £328,000 team.” A trio of friendlies in Ireland were arranged, which would, Busby thought, keep the players match-fit during the cold spell. He surely had a point, but the Reds’ poor form continued at a frosty Glenmalure Park, as only a late Bobby Charlton thunderbolt secured a 2-2 draw with third division Coventry City.

Bolton Wanderers followed in Cork on February 13, and this time torrential rain turned the pitch into a sticky, unnavigable bog, and Matt Busby and the club’s directors got a soaking in the uncovered dug-out. Crerand marked his debut with a 25-yard strike in a 4-2 win, but admitted afterwards: “I have never seen mud like this before and I never expect to have to play in anything like it again.” Busby did, though, telling reporters that conditions were “what we’ll have when games are resumed at home.”

It certainly seems as if United weren’t exactly reining in their competitive spirit. The final game of the tour was a clash against an Irish select XI back in Dublin on February 19. Noel Cantwell’s full-blooded tackle on Shamrock Rovers’ Frank O’Neill left the former Arsenal man needing stitches, and team-mate Mick Dalton was also stretchered off as Maurice Setters and Pat Crerand followed Cantwell into the referee’s notebook. United were booed off, but Setters said after the 4-0 win: “The Irish players cannot expect to be allowed to tip and tap the ball around the place and get away with it.” Tell that to Barcelona, Maurice. 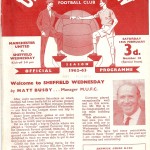 We interrupt this programme (left): Matt Busby’s notes on a game that never was (Click to enlarge)

Back home, 10 league and cup games having gone unplayed, a serious fixture pile-up now loomed large. Nonetheless, Crerand’s introduction was cause for optimism, and Eric Todd wrote in The Manchester Guardian that the Irishman also gave ‘immaculate service’ in United’s first league game for eight weeks, a 1-1 draw with struggling Blackpool on February 22.

Another draw at Blackburn was followed by a 5-0 drubbing of division two side Huddersfield in the two-months-delayed FA Cup third round, and despite a 2-0 reverse at home to title-chasing Spurs the following weekend, wins over Villa and Chelsea put United in the last eight of the Cup. Had spring finaly sprung in M16?

The weather-induced fixture squeeze helped ensure otherwise. For some reason United seemed to actively prefer to play games on mondays after turning out the previous Saturday. And unlike most of their rivals, between March and May, United played eight games, seven of them in the league, on monday evenings after only a 48-hour break. They gained a grand total of three points from those games.

Then again, such short gaps weren’t unheard of. Over Easter they even had to play three league games in four days, earning just one point, and those were the originally scheduled fixtures! Given the winner-takes-all nature of Cup games, the run to Wembley surely didn’t make the league games that followed any easier, and after losing all four games they played after Cup ties, they were back in the relegation mire by the time they’d booked their place at Wembley.

With the league season extended by three weeks, in mid-May United found themselves just a point above the drop zone with three games remaining, and travelled across town to face a Manchester City side who were a point behind, albeit with an extra game played. City had beaten second-placed Spurs the previous weekend, while United went into the game on the back of two successive defeats, the latter in another rearranged fixture from January, at fellow strugglers Birmingham City, which had lifted the Midlanders onto level points with the reds.

Looking back, it’s striking to consider how easily the events of May 15, 1963 could have nipped United’s post-Munich revival in the bud. When United came off the Maine Road pitch at half-time, 1-0 down to an early Alex Harley goal that Wednesday evening, relegation was looking like a very real prospect. And what would have happened then? Could they have held onto key figures like Charlton, Law, Crerand, Setters and Cantwell? History remembers Denis Law’s backheel, but it might just have easily have highlighted Alex Harley’s boot, or the fateful hand of Jack Frost a few months before.

Crerand for one felt the tension of the event, as his runing battle with City’s David Wagstaffe got them both booked, and exploded in the tunnel at the midway point. “(He had a go at me just before half-time,” Pat later recalled, “(I) said, ‘If you’ve got something to say then do it off the pitch.’ Well, he did. He came up to me in the tunnel and shouted, ‘you, you c**t!’ I turned round and belted him and he went down like a ton of bricks. Then City’s trainer came for me and I said, ‘You f**k off too or you’ll get it’. He took me seriously and retreated.”

Crerand admitted, “We didn’t deserve a point” and City certainly dominated, having another ‘goal’ disallowed for a marginal offside decision. Then, with City four minutes from a potentially historic victory, Wagstaffe played a short back-pass, former blue Denis Law nipped in, pushed it past onrushing City keeper Harry Dowd, and was pulled down. “I would never have scored,” Law later admitted, “I was going away from the goal and had lost the ball. It was a lucky break for us.”

Albert Quixall stepped up to equalise from the spot, and that kept United a point ahead of City, who had played a game more. Maybe United’s luck had turned just when they needed it most, because at this point, the weather had one last, indirect part to play in Manchester’s footballing fortunes. United’s home game against Leyton Orient, postponed from January 19, was now to be played on the final Saturday of the season – not a bad outcome given that Orient were already relegated by this point and had nothing to play for.

Goals from Charlton, Law and an own goal duly secured a 3-1 win while a demoralised City were thrashed 6-1 at West Ham, and went down.

United were safe, but it had been a very close call, and one that still induces a shiver when we think about that bitter British winter and consider what might have been.

A shorter, edited version of this piece first appeared in the February 2012 edition of Inside United magazine accompanied by lots of nice pictures and a couple of fancy sidebars. There is also a spanking interview with Eric Cantona in it, among many other indispensable pieces of ‘content’ that you simply cannot live without if you are, like me, a fan of the unpopular and popular leisure brand Manchester United.