The Juggalos, Insane Clown Posse fans known primarily for their love of facepaint and fizzy pop, have been classified by the FBI as a criminal gang. When will people stop demonising kids who love music? 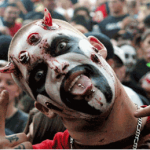 An Insane Clown Posse fan or Juggalo, at a gig in Colorado in 2003. Photograph: Soren McCarty/WireImage

Public Enemy’s Chuck D famously called hip-hop “The Black CNN”, in reference to its ability to help its audience make sense of the world.

However, if anyone, black or white, were to look to the multimillion selling Detroit hip-hop duo Insane Clown Posse as their main source of information, they might find this particular channel a little limited in its output.

ICP’s 10 albums to date have been characterised by misogynistic sub-gangsta lyrics and cod-mystic circus “themes”; few would mistake this for reliable news content. However, according to the FBI’s 2011 National Gang Threat Assessment report, a growing number of American youngsters might be heavily influenced by it.

These pioneers of “horrorcore” attract a dedicated cult following known as Juggalos, fans who wear clown facepaint in tribute to their heroes and – this one will have J Edgar Hoover turning in his grave – drink litre bottles of Faygo, the cheap fizzy drink that the band sprays over its audiences at their gigs. According to the report, “a small number of Juggalos are forming more organised subsets and engaging in more gang-like criminal activity”.

The report links members of the fan group to recent crimes including a shooting and an assault on a homeless man. It goes on to associate Juggalos with “drug use/sales” and “potential for violence”. Neither of which seem particularly substantial brushes to tar a whole group of music fans with.

But then, this is ICP we’re talking about, and if their fans are half as dumb as their music, they might just be persuaded that a horrorcore gangsta is something to be. ICP hit new heights of compelling awfulness last summer when the video for their single Miracles went viral, with lyrical highlights including “Fuckin’ magnets – how do they work?”, followed by the warning that: “I don’t wanna talk to a scientist – motherfuckers lying, and getting me pissed.”

The critical reception was, at best, mixed, with the Detroit News commenting that “hearing this song makes you wish ICP would stick to serial killing”. In 2003, US rock magazine Blender had voted ICP “the worst band of all time”.

All of which is fuel to the us-against-the-world siege mentality promoted in ICP’s songs and interviews. And while their lyrics may lack something in intelligence, the band are no slouches in the marketing department, having developed an effective brand identity around an evil clown image, shows that offer riotous fun that could almost be described as “good” and “clean”, and songs unpleasant enough to satisfy rebellion-hungry teens everywhere.

All the same, when you actually meet the ICP’s fanbase, you have a hard time reconciling the FBI’s view of them as would-be hoodlums. I rubbed shoulders with them at the band’s hometown show in Detroit a few years back. Or, to be more accurate, their shoulders rubbed my hips, since the average age of the almost entirely male audience must have been a little over 14.

ICP’s live act centred on activities that pubescent boys have historically enjoyed – running around making an unholy racket, and throwing unlimited supplies of fizzy pop around; they schedule regular “Faygo breaks” for just that purpose. It resembled a cross between Lord of the Flies: The Musical and a particularly unhinged episode of Tiswas. But ultimately, it was pretty difficult to imagine any of these fresh-faced youngsters getting in one of the line of parental SUVs lined up outside and whizzing off to commit a drive-by shooting, or any other kind of gang-associated crime.

Whether these criminal links are real or imagined, the Juggalos are only the latest in a long line of music-related youth cults that have caused moral panic with their strange attire and unruly behaviour.

As far back as 1926, a front-page editorial in Melody Maker, then a jazz musicians’ newspaper, condemned a painting in the National Gallery that depicted a white woman dancing “suggestively” to the music of “a black minstrel”, calling for the offending work to be burned (a full seven years before Goebbels had the idea) lest it promote inter-racial relations.

The rise of rock’n’roll in the 1950s was met with similar predictions of the social fabric fraying irreparably in its demonic wake. “The effect of rock’n’roll on young people is to provoke lawlessness, impair nervous stability and destroy the sanctity of marriage,” claimed US Pentecostal minister Albert Carter, and many parents wondered whether he might be on to something when dancing in the aisles at screenings of the 1955 movie Blackboard Jungle (featuring Bill Haley’s hit Rock Around the Clock) ended in violence and vandalism on both sides of the Atlantic.

Society’s fabric remained just about intact, and, with a few running repairs, it just about held together even after the mods and rockers rioted in the 1960s. The Sex Pistols’ fruity language on primetime telly led to the odd lorry driver kicking in his TV set, but aside from a few gob-filled gigs being smashed up, nationwide anarchy did not ensue. Moreover, most of those who survived a DIY nose-piercing without sustaining a fatal dose of hepatitis went on to be highly respected and law-abiding members of their community.

Yet still, each new generation of parents, themselves no strangers to youthful rebellion, are confronted with youth cults that seem alien and threatening to them.

In the 1980s, Beastie Boys fans were blamed for a spate of vehicular vandalism when VW badges became a must-have fashion accessory, while in the US, Tipper Gore’s Parents Music Resource Center (PMRC) successfully campaigned for “Parental Advisory” stickers to be added to “morally corrupting” records and CDs. Around the same time, metal bands such as Judas Priest were accused of inciting kids to suicide with backwards subliminal messages inserted into their recordings.

Few take such scares seriously now, and most would see the wisdom of Priest singer Rob Halford’s courtroom argument that if they wanted to insert subliminal messages in their music, they would have been along the lines of: “Buy more of our records.”
Demonstration by emos, fans of My Chemical Romance In 2008, My Chemical Romance fans protested against the Daily Mail’s allegations that they were part of a suicide cult. Photograph: Jenny Matthews / Alamy/Alamy

Nonetheless, police in this country can be just as ready as their American counterparts to link criminality to music. Promoters of grime nights in London have found their options severely limited in recent years after police pressure on venues. The police also forced the cancellation of a tour by Peckham gangsta rapper Giggs last year on the grounds that gun-related incidents had taken place at similar shows.

Meanwhile, the mysterious influence of music on fragile teenage minds will always scare middle England enough to help sell a few newspapers. So while the musical genre known as emo (short for “emotional hardcore”) flourished for years, looking no more obviously harmful than a Scouting For Girls ballad to anyone reasonably well acquainted with alternative rock sub-cultures, the Daily Mail’s coverage of a 13-year-old girl’s suicide in May 2008 chose to paint it as something much more sinister.

It described emo as “characterised by depression, self-injury and suicide”, and pointed to New Jersey goth-rockers My Chemical Romance as leading exponents, “one of the foremost of these ‘suicide cult’ bands”. Never mind that the teenager in question had apparently only been listening to the group’s music for two weeks, and had a history of self-harm, or that a gloomy, melodramatic tendency had been present in alternative rock since before the punk era.

The stories caused 100 or so teenage MCR fans to take the drastic step of getting out of bed early on a Saturday morning and travelling to central London for a demonstration, and a few more confrontational souls to march on the newspaper’s offices to protest at this misrepresentation of their favourite music and lifestyle. Unfortunately, it was a Saturday and no one was in the office. No common sense, these kids, eh?

Of course, the most worrying result of all this is not the prospect of US cities being overrun by marauding gangs of evil clowns bent on law-breaking, but the likelihood that the resulting publicity will propel Insane Clown Posse to new heights of commercial success. Because for all the froth and bother these moral panics cause, they invariably only serve to reinforce the outlaw status of those at the centre of it all. It’s not big, and it’s certainly not clever. But it will always sell records.