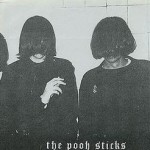 Why, I was once sufficiently unimpressed with a 1992 live concert by this very quartet to end my New Musical Express review with the words ‘Pooh Sticks? Pooh Sandwich.’

That gig, from their ill-advisedly beefed up power-pop period, was over after a mere 45 minutes, and after a brief ripple of disquiet among the band, their mates and a tiny fraction of the 1012 NME readers who bothered to plough through the downpage live reviews of June 1992 , it was consigned to the dustbin of history.

Their two albums went much the same way.

But I would like to fish one Pooh Sticks’ single out of that stinking depository, wipe off the stains of rotting Scorpio Rising and ignore the lingering stench of decomposing Yeah God! and nominate it for rehabilitation.

This winsome jangle-pop charmer effortlessly took up the cuddly twee-hugging C86 template and used it as a platform for a gentle but devastatingly accurate skewering of indie anorak one-upmanship.

And I was immediately reminded of its timely but timeless sentiments when Facebook was flooded by 100 Influential Albums threads last week.

Because ‘On Tape’ is all about a tendency of music fans that was just as visible on social media last week as it was at Close Lobsters gigs 25 years ago.

I’m sure the Pooh Sticks won’t mind me playing fast and loose with their copyright in order to let the lyrics tell the story:

I’ve got ‘Falling And Laughing’ – the original Postcard version.

You want it, I got it – I’m talkin’ ’bout everything

All the Velvet Underground records… on tape

I was ligging with Mighty Mighty. I think they all really liked me

You want it, I got it – I’m talkin’ ’bout EVERYTHING

I’ve got The Monkees’ Head soundtrack… on tape

I sent for the Soup Dragons single, mail-order only

£1.30 to Martin Whitehead, but it never came

I rock out to Philip Spector [be my bay-bee!]

I’ve got everything by The Ronettes… on tape

‘On Tape‘ is, to my ears, one of the great satirical pop songs. Yes, I’m putting it in the same snug ante-room of the classic pop gallery as ‘Dedicated Follower of Fashion’ and ‘All I Want For Christmas Is A Dukla Prague Away Kit’. And this was not their only achievement of note in the genre of socially observational pop. Calling their previous single ‘I Know Someone Who Knows Someone Who Knows Alan McGee Quite Well’ is also worth of our congratulations regardless of its rather ropey musical content.

Admittedly, ‘On Tape’s reference points may have dated slightly – the likes of Sky Saxon‘s solo album and the Head soundtrack are now easily accessible via the web, in contrast to their rare, import-only, £25-a-pop status back then, and unreliable mail orders from Martin Whitehead (guitarist of The Flatmates – a mate of mine ordered something from him too, and guess what? It never came), but younger, educationally subnormal readers might like to substitute the words ‘on tape’ with ‘on download’, and for mail-order only, think ‘off some bunch of chancers via eBay’. But if it’s OK with you, we’ll draw a discreet veil over who Mighty Mighty were.

But the character narrating the whole sorry tale remains a familiar one. He’s the bloke (it invariably is) who saw them first. He’s the one who used to like them before ‘the little girls got into them’. And he still doesn’t know that everyone is still laughing at him.

The Pooh Sticks, I salute you. And sorry about the Pooh sandwich.