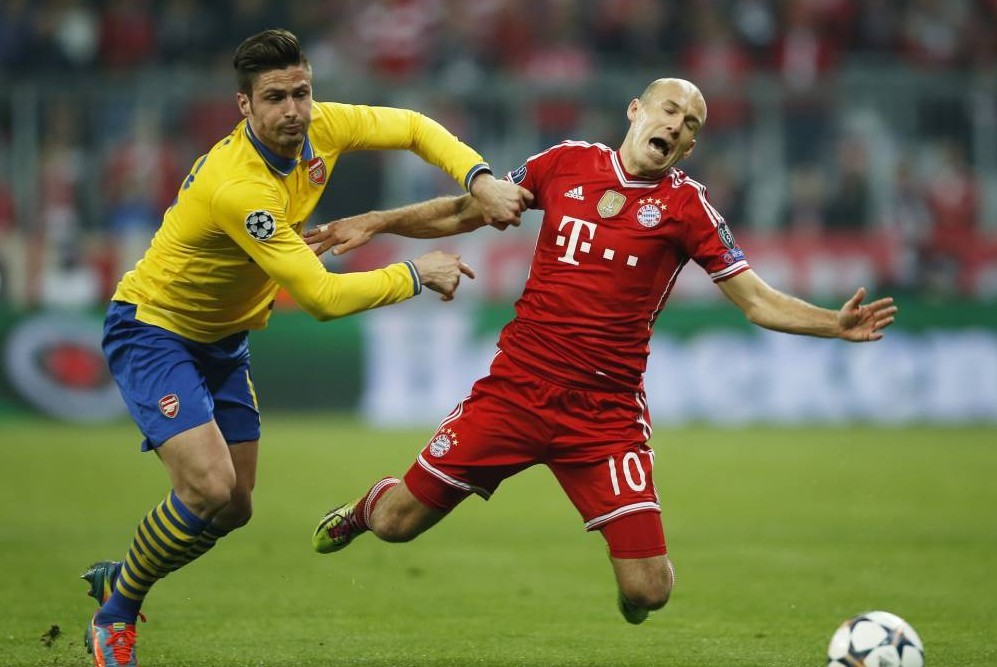 Who can blame him?

I refer, of course, to the FA’s announcement that from next season, diving offences will be punished with a retrospective two-game ban.

“The best thing to happen in football since the back pass to the goalkeeper rule,” said Bob B. on Twitter this week, echoing the received opinions spouted by many millions of other easily outraged keyboard warriors.

Jurgen Klopp, Tony Pulis and others have also expressed approval, while Leicester’s Robert Huth tweeted “Great news, add pretending to be injured and crying when you lose and we are really getting somewhere!” His condemnation of teammate Jamie Vardy’s numerous dubious tumbles last season presumably got lost in cyberspace.

But at the risk of being decried as an enemy of common sense, can I make a modest and reasonable defence of the heinous crime that is ‘simulation’, aka diving, aka CHEATING, dragging the game into the gutter, dancing on the corpse of Sir Bobby Moore and sticking two fingers up at the gods of the beautiful game? Dare I?

I don’t deny that in an ideal world, simulating fouls and deceiving the ref would not take place. And maybe, when all players wear computer chips and robo-refs spot every single rule infringement accurately, there’ll be no need for it. But when ranking sporting crimes, I feel strongly that diving is pretty far down the list compared to what else occurs regularly on a football pitch with barely a whiff of protest or punishment.

It’s the emphasis on the word ‘cheat’ that sticks in my craw like Marouane Fellaini’s elbow. It’s routinely used to condemn players that make the most of being fouled, but rarely, if ever, used about the many hundreds of players across all levels of football whose game is built around pushing, pulling, kicking, nudging, tripping, clattering, clobbering, thumping and, given the chance, half-crippling more skillful opponents. 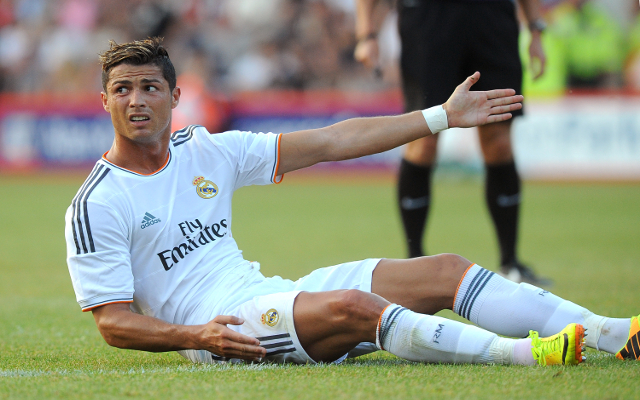 Refereeeee! Why do they try to hurt me so?

If you google ‘most fouled’ players, the Premier League list (topped at the time of writing by Zaha and Hazard) is almost entirely populated by skillful forwards, tricky wingers and playmaking midfielders – the very players that are the biggest box office attractions in the game, the ones who do the most to create and finish chances, and the ones whose absence would surely make football an infinitely less engaging spectacle.

But are their protests at said fouls ever backed up by supportive howls of indignation from the fans, pundits or managers? Not outside their home stadia they aren’t.

How often do you think world class talents such as Ronaldo or Messi are kicked in each game by ‘good, honest professionals’ (c. Martin Keown)? I know, I know, they’re crying all the way to the bank, no doubt. Yet when such stellar talents leap out of the way to avoid an obliterated metatarsal or shattered pelvis, and fall to the ground once more with feeling so the ref might just take notice, I think they’re within their rights to appeal for a pen. And after seeing so many such batterings go unpunished, can you blame them for taking advantage of the odd innocuous challenge by claiming it’s something more? They’re only redressing the balance, surely? And it’s still scant consolation for being hoofed, elbowed, stud-sliced and toe-squashed 53 times every 90 minutes, . 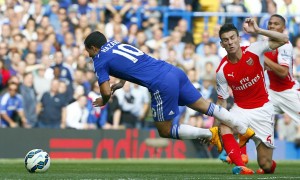 Fans, players and pundits alike have got their priorities seriously back-to-front on this issue. For every youtube compilation of players diving there are precisely, well, zero compilations of defenders’ sly digs, secret stud-rakes, casual stamps, stray elbows and passing bone-scrapers. That’s not just because it’s way harder to catch on camera. It’s also because it’s invariably the work of those universally admired defenders, the Robert Huth type who would sneer at their victims’ complaints as the kind of cry-baby ‘play-acting’ they most abhor. But how are these transgressions of the rules – which are infinitely more likely to end a player’s career or contribute to their physical decline – so much less serious than trying to take advantage of a defending side’s malicious intent by drawing a foul?

And since the FA are now making such a major statement about ‘simulation’, there’s another issue they might want to consider – cracking down on fouls that don’t result in a player falling to the floor. Because players collapse when they get a kick for good reason – if they didn’t, no one would notice any foul had been committed. How often have you seen a penalty given for a non-handball foul when the player has stayed on his feet? Barely ever. And are you telling me that there aren’t a considerable number of unseen contacts that should technically warrant a penalty under the letter of the law? But of course the referee would never dare give them, as everyone watching would insist nothing serious had gone on and demonise them as a whistle-happy jobsworth who shouldn’t be allowed near a professional football pitch. Yet if refs cracked down on actual foul play half as keenly as they’re being asked to get tough with ‘simulation’, then you might find there was less need for players to suddenly lose their footing in order to highlight an offence.

I’m not saying all dives are justified. But few happen in a vacuum. You may remember Joey Barton’s blatant attempt to get a Lincoln player sent off in the FA Cup a few months back, an offence curiously ignored by his manager Sean Dyche, who had previously been vocal in calling for diving bans. But even Barton would doubtless claim that Lincoln’s players had spent much of the match trying to wind him up (well, it’s Joey Barton, you would, wouldn’t you?), kick him and generally get him to react and cause the referee to issue a card or two. If you were in Barton’s position, having suffered what you considered numerous unpunished wrongs against a lower-division side employing shamelessly physical tactics, wouldn’t you feel justified in using underhand methods to even the score?

The increasing focus on simulation at the expense of real foul play also has a negative effect in other ways.  It’s pretty much routine for players to miss games now as a result of a ‘knock’ from a previous game, and do you think that ‘knock’ came from one of their own players, or clattering into an advertising hoarding? No, it was just a routine foul from the opposition, which may well have gone unnoticed because they didn’t make a big deal of it, and resisted the temptation to exaggerate their pain or go to ground.

Meanwhile, we bemoan creative, attacking foul-magnets ‘losing a yard of pace’ as they get older, or their youthful promise fading after a string of injuries. Does this result from too much leaping to the ground under minimal contact? Or is it more like death by a thousand cuts, bruises, stitches and oft-ignored assaults?

The diving issue is also a stick that is routinely used to beat our game by those who have never loved it and never will, yet we seem only too happy to bend over and take six of the best from footyphobes everywhere. 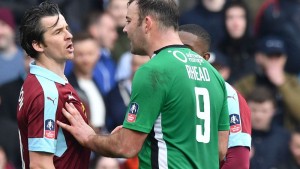 On your side, Joe

Whenever you hear non-fans or casual observers talk about what puts them off football, they’ll say ‘all the diving and cheating and rolling around pretending to be injured’. Rugby types are particularly prone to look down at footy for its supposed dishonesty in this area. Yet rarely do they condemn the considerably more serious cheating in their own game – crushing each other’s nads in the scrum, eye-gouging, ear-chewing, probably pancreas-twisting and willy-slicing if they could find a way to do it without carrying weapons – all these are dismissed by rugby fans with a smug smile as ‘the dark arts of the scrum’, something to be acknowledged and kept under wraps with a nod and a wink, like police corruption or election expenses. No, they’re inexcusable – considerably more so than feigning injury or going down too quickly to get a free-kick. At least no one gets their facial features permanently disfigured, their brains damaged or their ability to have children permanently harmed by a bit of footy play-acting. So you can shove your ‘game for thugs played by gentlemen’ where the sun don’t shine – the same place a tough, ‘honest’, no-nonsense second row forward will put their fingers in the ruck if he thinks it’ll give him an advantage.

But I digress. If we truly value attacking football and the flair players that deliver it, they deserve more than just being labelled cheats every time they take advantage of the fact that half their opponents are trying to disable them.

Sure, it’s textbook moral relativism to claim that diving is justified compared to the greater evils elsewhere. But in an imperfect game, we have to pick our battles. And I’d argue the battle to clean up serious foul play, reduce injury and free up flair players to perform without fear of being maimed, is a way more important one than some spurious campaign to reduce simulation.