As the inmates of Athens’ maximum security Korydallos prison wandered around the prison exercise yard one Sunday afternoon last month, they heard the unmistakable thrum of helicopter blades approaching. As the black chopper loomed into view over the high walls and a young woman leant out of the passenger seat with a rope ladder, it was obvious that these weren’t sight-seers who’d taken a wrong turn at the Parthenon. They’d come for Vassilis Paleokostas. 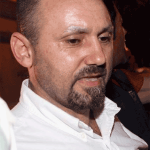 Sure enough, as the ladder hit the ground, the 43 year-old serial bank robber and master kidnapper grabbed hold and started climbing, followed by his old partner in crime, 34 year-old Albanian bank robber Alket Rizaj.
As the dynamic duo scrambled towards their freedom, prison guards opened fire. However, the rescuers – a man and a woman, along with a male pilot – fired back from the helicopter with AK-47s. A surreal gun battle ensued, and in classic action hero tradition, the escaping pair somehow managed to dodge dozens of bullets on their way up to the cabin.
As they were whisked away into the overcast Athens sky, the watching prisoners cheered wildly. And although the helicopter was hit by several bullets, including one that pierced its fuel tank and could easily have brought their adventure to a disastrous end over the nearby apartment blocks, the gang got away, as residents nearby heard the commotion and filmed them speeding through the grey clouds on their mobile phones.
The back story that then came to light would only add to the sense of truth being stranger than fiction. Because if this all sounds like a Hollywood movie, it was actually the sequel, and the plotline was uncannily similar to its predecessor, played out less than three years earlier. Yes, unbelievably, Paleokostas and Rizaj had escaped from the same jail before. In a helicopter. In broad daylight.

On that occasion, in June 2006, they pulled it off in slightly cooler, if no less audacious, fashion. A hijacked sight-seeing helicopter flew right into the prison yard and landed amid exercising inmates, fooling guards into thinking it was an official visit from prison inspectors. Paleokostas and Rizaj snuck aboard, flew off to a nearby cemetery, and fled on waiting motorbikes.

OH, BROTHER
Even after that daring episode, Vassilis Paleokostas was not the most infamous fugitive in the whole of Greece. That honour belonged to his elder brother Nikos. A prolific armed robber suspected of orchestrating scores of heists, Nikos had escaped from Korydallos back in 1990 during a mass breakout, and rumour had it that it was he who masterminded his brother’s 2006 escape.
Paleokostas Sr’s 16 years on the run ended after a car chase in central Greece in September 2006, just after Rizaj was recaptured hiding out at his cousin’s apartment.
But Vassilis Paleokostas was still at large, and, it later transpired, he was up to his old tricks – the kind of kidnappings and robberies for which he’d served 11 years of a 25 year sentence before his escape.
Greek industrialist Giorgos Mylonas was abducted and held for two weeks in June 2008, and after a ransom reported to be 12 million Euros (£9m) was paid, the money was eventually traced to the missing fugitive. When Vassilis was finally caught in Thessaloniki in August last year, police found a huge arms cache, gas masks and nearly three million euros in cash, leading them to conclude that he was planning what Thessaloniki’s police chief Dimitrios Papadopoulos described as a ‘spectacular’ heist.
After several months in a new prison, in February Paleokostas was brought back to Korydallos prison to await trial for the 2006 escape and helicopter hijack.
Prison authorities thought it best to house him in maximum security, along with other dangerous prisoners. Such as a certain Alket Rizaj, who happened to be in the adjacent cell.
Even though 22 February was the day before they were both due to go to court for the previous escape, their guards evidently saw no reason why they shouldn’t exercise together. Yet they’d only been out in the yard for five minutes on an unscheduled breath of fresh air when their surprise visitors arrived.

SCANDAL AND SCAPEGOATS
A few hours after the breakout, the helicopter was found abandoned near a highway heading away from Athens towards central Greece, next to the bound, gagged and hooded pilot.
The getaway helicopter, it turned out, came from a tour company that promised ‘clever escapes’. The pilot later claimed it had been chartered by a couple who said they wanted to go from the town of Itea in central Greece to Athens.
“Threatening the pilot with an assault rife and hand grenade, they hijacked the aircraft,” a police source later confirmed, “demanding that it fly low towards the prison to avoid radar detection. The woman was especially agitated.”
The whole episode was a crippling embarrassment to the already beleaguered Greek authorities, who were reeling from months of riots, social unrest and terrorist bombings.
So much so, in fact that Greek prime minister Costas Karamanlis called an emergency cabinet meeting.
“This was an insult which I will not accept … I will take measures as harsh as necessary,” Justice Minister Nikos Dendias announced and immediately dismissed the general secretary of the ministry, the inspector-general of prisons and the head of the jail.
“In any other civilised country ministers would have resigned,” said Dinos Rovlia, an opposition MP. “In Greece … the only thing that works is the transport of inmates from Korydallos by plane. Clearly the state and the security service don’t exist.”
Scapegoats were needed and the pilot was promptly arrested, along with four prison guards. One of the guards, who had allowed the escapees to exercise together, was given a three-year suspended jail sentence.
“The hunt will continue until they are found,” Athens police spokesman Major Panagiotis Stathis told Shortlist. “Our job is very difficult here in Greece right now, but these men are very dangerous, and the public must be protected. People who don’t know these men may make a joke about it, but they are not heroes – they are kidnappers, robbers, murderers – very dangerous men.”
A huge manhunt continues, and is said to have gone beyond the hills and villages where they were initially assumed to have headed, and has extended to neighbouring countries such as Albania and Bulgaria.  “We will go wherever we have to go to find them,” said Stathis.
However, they look to have a – quite literally – uphill task in a mountainous part of the world where people aren’t exactly queuing up to help Plodios with his enquiries.
“These guys are popular because he made the government and police look stupid,” says Craig Therlock, a writer and blogger from Thessaloniki who campaigns for prison and police reform in Greece. “A lot of people here dislike the police intensely for their violence and incompetence. The Paleokostas Airlines group on Facebook signed up more than 50,000 members in a matter of days after the escapes, and the Greek language blogsphere is full of jokes and videos at the expense of the police and government.”
A couple of examples: “What was Paleokostas doing in the prison yard on Sunday? – Checking in.” ; “Who is Paleokostas’s favourite singer? Frank Sinatra – Fly me to the moon….”
The pair are commonly referred to as Robin Hood figures, based on the rumour that the Paleokostas brothers used to give away some of their ill-gotten gains to the poor in the Trikala region of central Greece where they come from. Fact or folklore, it only adds to the outlaw romance surrounding the fugitives.
In absentia, the pair were recently handed long jail terms for their 2006 escapes. What’s the greek for ‘horse’ and ‘stable door’, one wonders?
Meanwhile, Greek betting sites are offering odds on when they will be recaptured. The smart money is on ‘later’ rather than ‘sooner’. Unless, of course, in keeping with the movie-style plot that has unfolded so far, they just can’t resist one last job…